On the occasion of the forty-fifth anniversary of the entry into force of the Biological Weapons Convention (BWC) in March 2020, United Nations Secretary-General Antonio Guterres noted that “the norm against biological weapons remains strong”, but also stressed that “the international community must remain vigilant” against threats from biological weapons.

Faced with evidence of an increasing risk of biological weapons, many states have undertaken various measures to prevent, prepare for and respond to biological threats. International organizations with existing mandates to assist states in case of a disease outbreak have also been considering the question of responding to a deliberate event and some have started to gear up for such an occurrence.

However, capacities in the framework of the BWC, which is the primary international instrument prohibiting biological weapons, are lacking. Article VII of the Convention provides a mechanism for States Parties to request and receive assistance in case of the use of biological weapons, but it has never been invoked and its operationalization has not been explored in detail until recently. 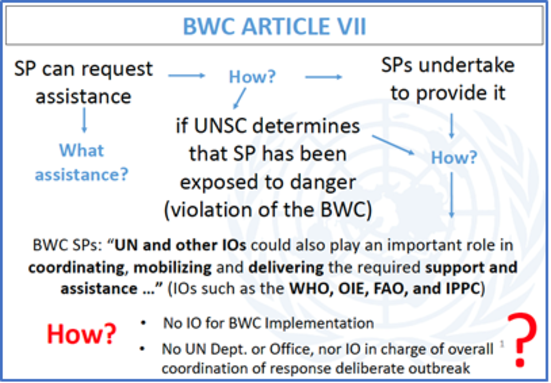 Additionally, at present there is no lead organization or comprehensive international mechanism that would ensure the overall coordination of response actors and activities in case of a major deliberate outbreak of human or animal disease, or of plant pest. In order to remedy such shortcomings, since 2017 the BWC Implementation Support Unit (ISU) has been coordinating a project of the United Nations Office for Disarmament Affairs (UNODA) on “Strengthening global mechanisms to respond to deliberate use of biological agents”. This project, which is funded by Canada’s Weapons Threat Reduction Programme, is fully consistent with and supportive of Action 11 of the Secretary-General’s Agenda for Disarmament (which mandates UNODA to “work with all relevant UN entities to contribute to developing a framework that ensures a coordinated international response to the use of biological weapons”) and the Biosecurity Deliverables of the Global Partnership Against the Spread of Weapons and Materials of Mass Destruction.

The key output of this project is the development of a first draft of an “International Bio-Emergency Management Framework for Deliberate Events” (BEMF), an informal, non-prescriptive, non-binding policy document developed in cooperation with several United Nations offices and departments, as well as other relevant international organizations.

The general aim of the BEMF is to contribute to a harmonized response among international organizations in the event of a deliberate disease outbreak, and to provide a framework for dialogue and cooperation among them.  It describes existing response and coordination mechanisms within international organizations operating in the human, animal and plant health sectors. This document also covers the possible humanitarian implications of a deliberate disease outbreak, and the related humanitarian response mechanisms. 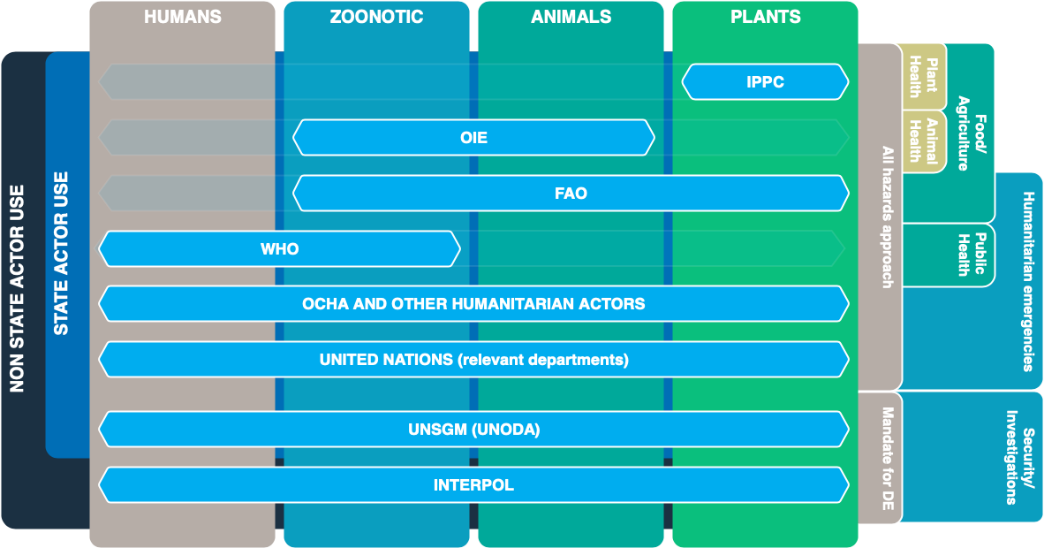 Following a recommendation from the UNOCT project on “Ensuring Effective Inter-Agency Interoperability and Coordinated Communication in Case of Chemical and/or Biological Attacks”, the BEMF is modelled on the International Atomic Energy Agency’s “Joint Radiation Emergency Plan of the International Organizations” (“J-Plan”) while factoring in the fundamental differences between the nuclear and the biological areas.

The BEMF focuses solely on cooperation among the international organizations participating in it. It does not prejudice nor affect or replace their respective roles and responsibilities as specified by their relevant statutes and regulations. It simply refers to them.

The following UN offices and departments, and other international organizations and entities are participating in the project: Executive Office of the Secretary-General, UN Department for Safety and Security, UN Interregional Crime and Justice Research Institute, UN Operations and Crisis Centre, UN Office for the Coordination of Humanitarian Affairs and UN Environment/OCHA Joint Unit, UN Office of Counter-Terrorism (UNOCT), UNODA, UN Office of Legal Affairs (UNOLA), Food and Agriculture Organization of the UN, International Criminal Police Organization , International Plant Protection Convention Secretariat, World Organisation for Animal Health, Organisation for the Prohibition of Chemical Weapons (in circumstances relevant pursuant to the Chemical Weapons Convention), and the World Health Organization. A dialogue has also been undertaken with the Inter-Agency Standing Committee Secretariat, the International Committee of the Red Cross, the International Organization for Migration, the UN Department of Political and Peacebuilding Affairs and the World Food Programme. 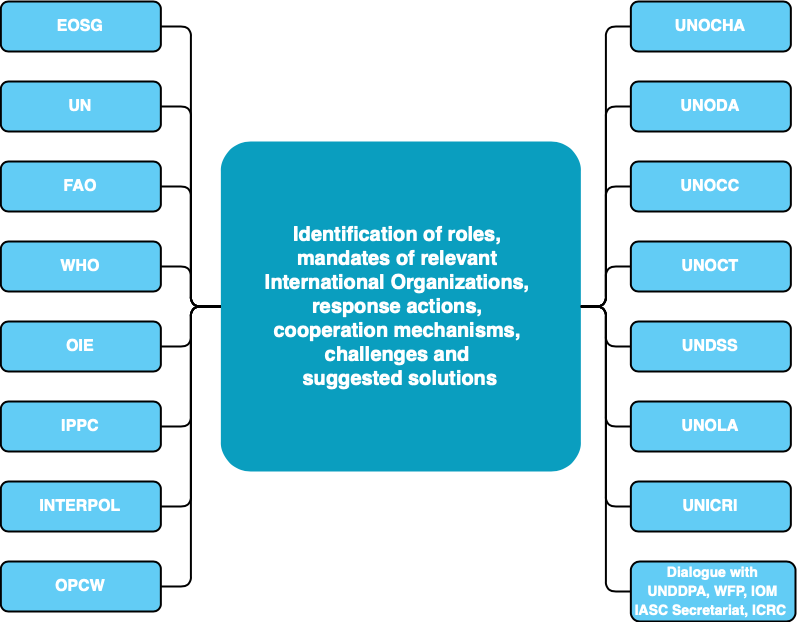 In November 2019, an inter-agency table-top exercise was held with project partners via VTC. The exercise was planned and organized with the kind support from the UN Office for the Coordination of Humanitarian Affairs (OCHA). It was held remotely via alerts through the OCHA Virtual On-Site Operations Coordination Centre (vOSOCC) and VTC via WebEx. The purpose of the TTX was to test connection and emergency communications among participating international organizations. Forty-five representatives from crisis/operations centres and relevant substantive units of 19 UN offices and departments, as well as from other international organizations participated in the exercise as players. A second such exercise is planned for this coming fall. Project partners have also been reviewing the BEMF, which will be finalised by the end of 2020.

The importance of the BEMF, and of strengthening the BWC, has been underscored by the COVID-19 pandemic. As noted by Secretary General Guterres, the pandemic has highlighted “the need to strengthen the Convention, which lacks an oversight institution and contains no verification provisions, by enhancing its role as a forum for the consideration of preventative measures, robust response capacities and effective counter-measures”. In this context, it is hoped that the work on the BEMF and under action item 11 of the UN Secretary-General’s disarmament agenda will contribute to developing a framework that ensures coordinated international assistance to the use of biological weapons. 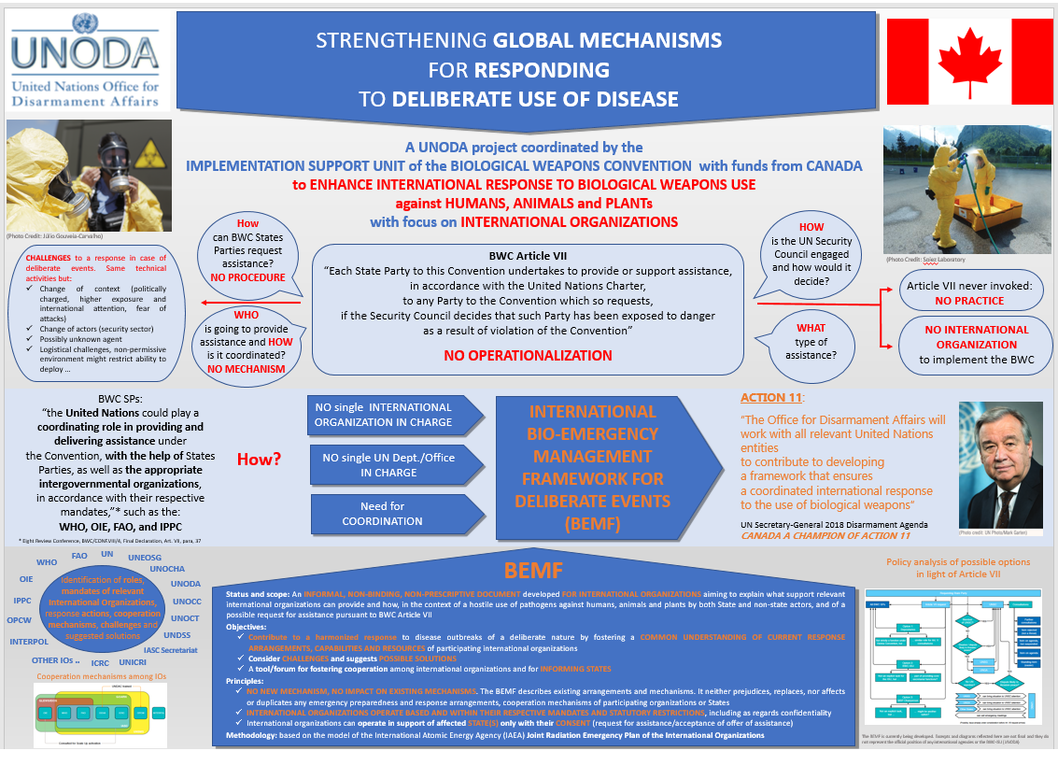