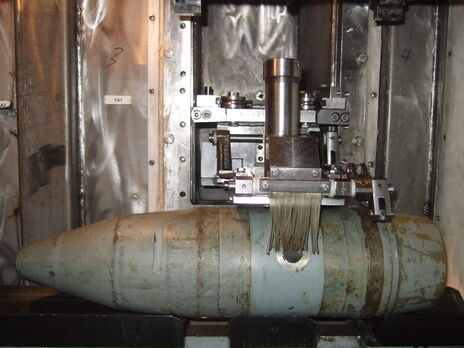 From World War I to ongoing conflicts in Syria and northern Iraq, chemical weapons remain the most widely proliferated and used weapon of mass destruction.

Support for the destruction of Russia’s declared Chemical Weapons stockpile was one of the original priorities and rationale for the establishment of the Global Partnership.

Over the period 2002-2017, many GP members contributed significant financial and technical resources to assist Russia to destroy the world’s largest arsenal of chemical weapons, a massive declared stockpile of 40,000 metric tonnes (80% being lethal nerve agents) stored in millions of munitions, bombs, tanks and bulk containers.

In September 2017, destruction of CW in Russia was completed, a significant milestone and a tremendous success story for the Global Partnership, that built on past GP support for the elimination of declared CW stockpiles in Libya and Syria.

The destruction of declared CW stockpiles in Russia, Libya and Syria has not eliminated the global CW threat. Chemical weapons continue to be used in Syria and Iraq.

AREAS OF FOCUS INCLUDE:

Terrorists and certain states of proliferation concern retain their interest in acquisition and use of chemical and other weapons of mass destruction.

To this end, the GP’s Chemical Security Working Group (CSWG) has adopted and is implementing a Strategic Vision that aims to mitigate all manner of threats posed by chemical weapons, including state-based CW programs and the acquisition and use of CW by non-state actors.

Through the Strategic Vision, GP partners have committed to monitor and consider responses to new and emerging CW threats, and to enhance mutually reinforcing and complementary cooperation with, and efforts of, the Organisation for the Prohibition of Chemical Weapons (OPCW) and other international stakeholders.